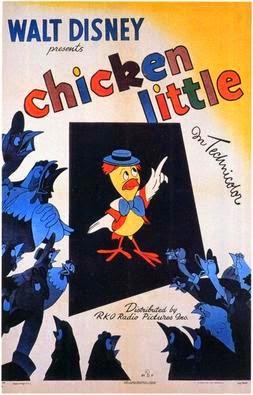 It's a peaceful day at the local poultry farm, and our narrator introduces us to the locals, Cocky Locky, Henny Penny, Turkey Lurkey, Ducky Lucky, Goosey Loosey and the titular Chicken Little, (a yo-yo wielding simpleton). But then Foxy Loxy happens along intent on a chicken dinner.

He takes the advice from his psychology book, (originally Little Red Book ) choosing to manipulate the masses by beginning with "the least intelligent" first, Chicken Little, and convinces him that the sky is falling.

Chicken Little spreads the word, but Cocky Locky proves the story to be false. In retaliation, Foxy Loxy spreads innunendo and rumors that Cocky Locky isn't the smart chicken he appears to be, which leads to another rush of panic among the avians. Pretending to be a "voice of wisdom", Foxy Loxy convinces Chicken Little to stand up and challenge Cocky Locky's right of leadership.

The two continue to argue about the falling sky, until Cocky Locky states, "if the sky is falling, why doesn't it hit me on the head?" From his hiding place, Foxy Loxy shoots a piece of the sky (a piece of wood, painted blue with a star on it) at him, hitting him in the head and knocking him out.

Everyone is shocked and realize that Chicken Little was right about the sky all along. They ask him what they should do, and Foxy Loxy whispers to lead them to "the cave." Convinced this is the right thing to do, Chicken Little leads the panicked masses to Foxy Loxy's den. Once everyone's inside, Foxy Loxy goes in after them and seals up the entrance. The narrator reassures us that everything will be alright.

The cartoon closes with a pot-bellied Loxy picking his teeth and arranging the wishbones of the devoured birds in a row resembling a war cemetery. The narrator is shocked and insists that this isn't how the story was supposed to end. Foxy Loxy smirks evilly and reminds the narrator not to believe everything he read .
Postado por Ivo Affonso às 18:25